All you need to know about introducing the MediatR library for ASP.NET Core

In general, we put our business logic in service classes. Sometimes they are larger, sometimes smaller. There is also a dilemma of whether they should know about each other. Let us consider what our code might look like if we created a separate class for each method of the service. We will use the MediatR library to do this

If you are wondering why, the answer is simple: to increase consistency and reduce coupling. We will not deal with concepts like CQRS or CQS for now.

Normally, the in-system messages and the code that processes them are tightly coupled. In large ASP.NET projects, it usually looks like this:

This can lead to 2 things:

Using a mediator pattern, we create an object that encapsulates how objects interact. This, in turn, reduces dependencies between communicating objects and allows the interaction between them (in the example: controller and service) to be changed independently.

After incorporating MediatR into our projects, the project will look more or less like this: 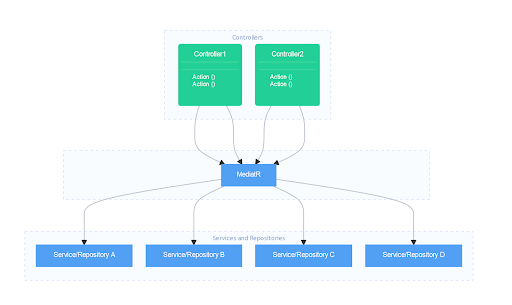 Which service (or repository) is used after the controller action is called is determined at the beginning of the project. In the following project, all interactions are determined by scanning the assembly, but there is also the possibility to define connections explicitly.

To take advantage of the MediatR library, you must add two packages to the project.

The first package named MediatR contains the entire core. The second package contains MediatR.Extensions.Microsoft.DependencyInjection. This helps in proper registration of the library in the . NET Core MVC application DI container. Also, this package automatically registers all the Handlers in our project.

The easiest way to add them is to use the "AddMediatR" method, which extends the IServiceCollection interface. 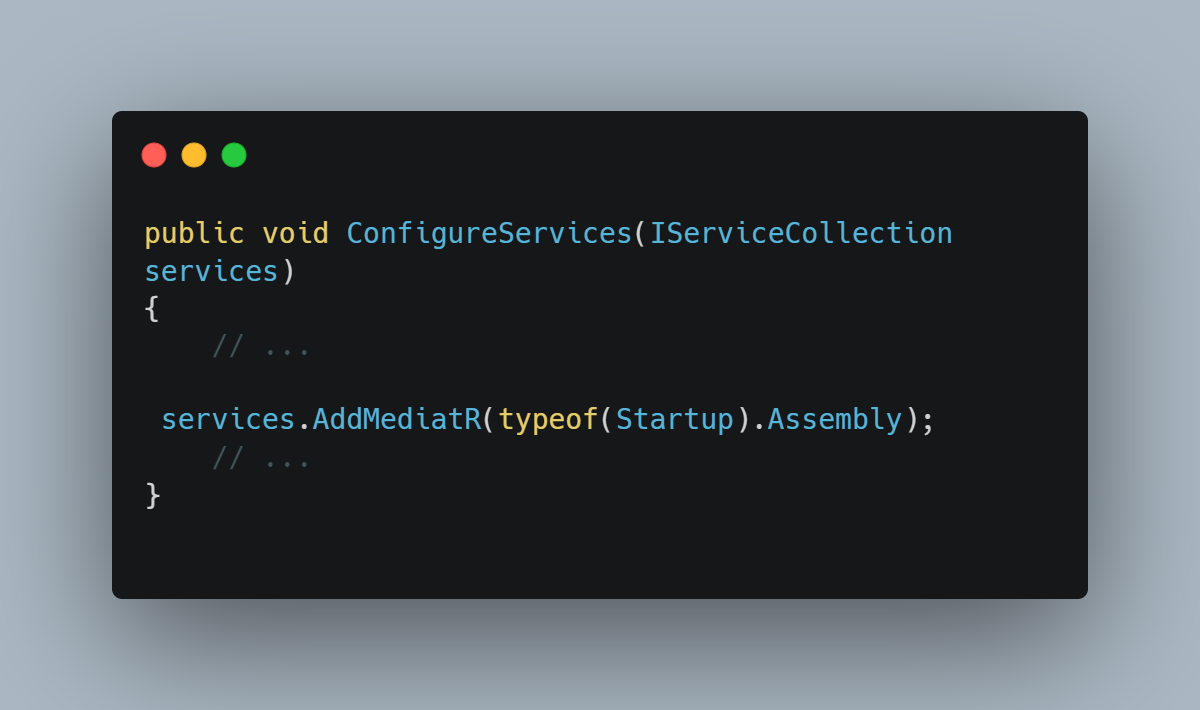 If our handlers are in a different assembly, we can overload this method and simply tell it which assembly to look in. 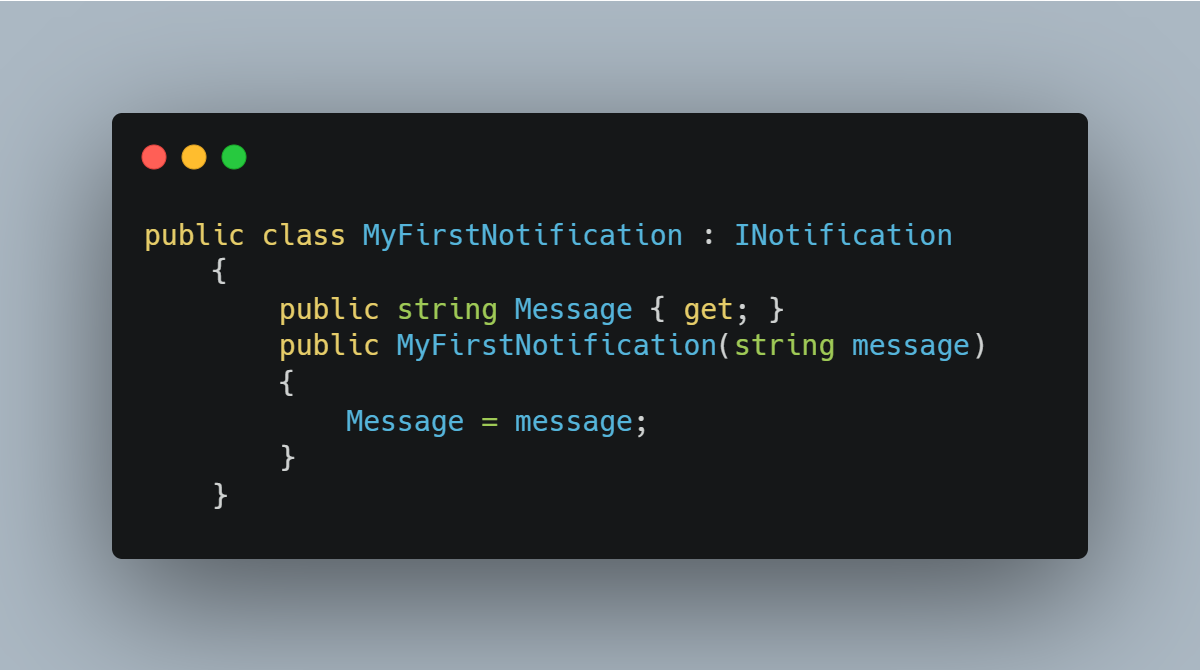 This is just a pointer interface. It does not force us to implement any special method.

Next, we move on to introduce the class that will handle the notification described above. The class must implement INotificationHandler, while we need to specify in the T parameter which notification we want to handle in this class.

The interface will force us to implement the method "public Task Handle(T notification, CancellationToken cancellationToken)". It is in this method that our entire implementation of the Notification handler will be. Let's create an example class "MyFirstNotificationHandler". 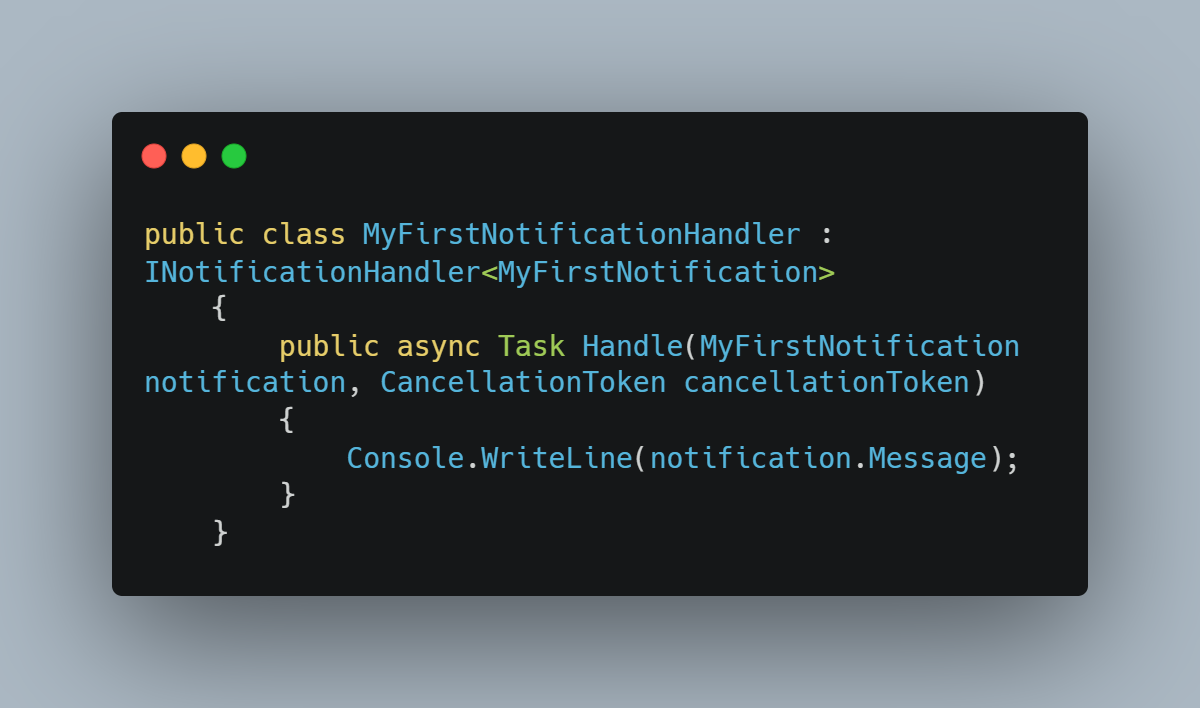 All we need to do is add the retrieval of the mediator instance from the DI container to the controller. Then, in some controller action, we can send our event using the Publish method. 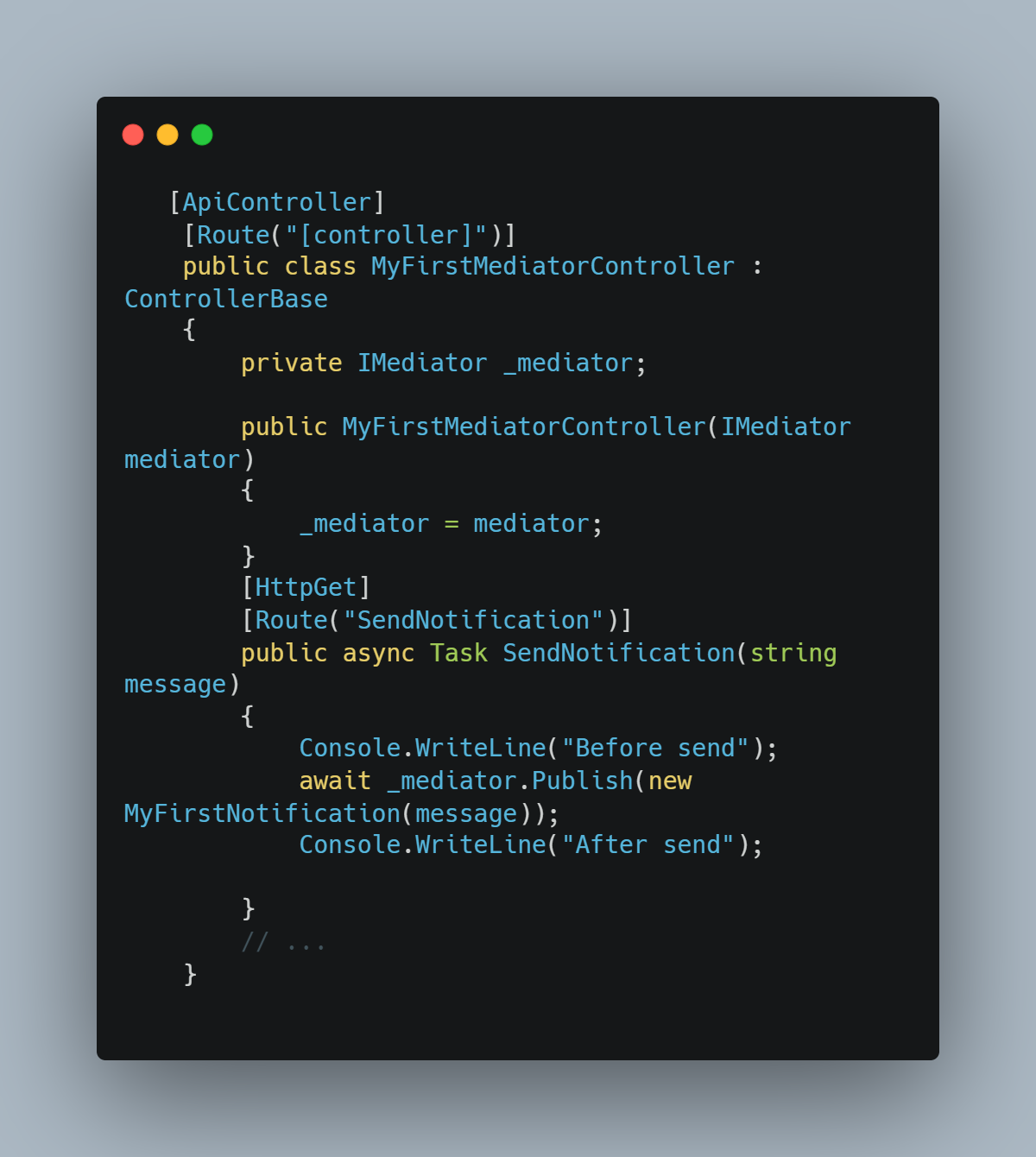 Done! We have a complete event implementation in C# and .NET Core. We can invoke it by using swagger. After typing anything and clicking execute, we get 200 Success response from the web API. Here is how it looks: 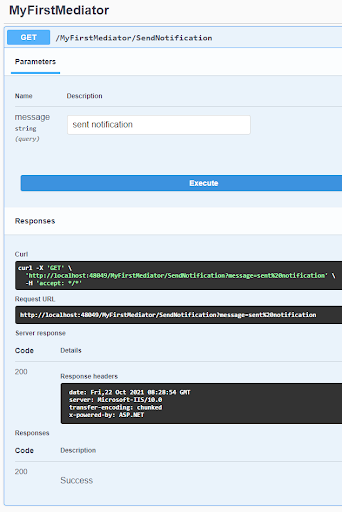 You have probably noticed that I’ve used Console WriteLine 3 times in the code. As you can see, the output is there after executing our endpoint.

This might seem unimportant right now, but we will need it to debug MediatR’s decorator implementation, called Pipeline Behaviours, later in this tutorial.

Getting a response after sending a request

We are making it too easy for ourselves. So let us consider a problem: what happens when we need to get a response from an event? For example, to find out if a particular operation was successful, or as part of an error message to the user. This behavior is also provided for in the MediatoR library.

In the MediatoR world we call such a use case a "Request". It is something like an HTTP Request :), or at least you can see the similarities in operation. We send a request and receive a response.

Coming back to the point - our object POCO must inherit from the interface IRequest. Where T stands for the return type to be returned by the handler. 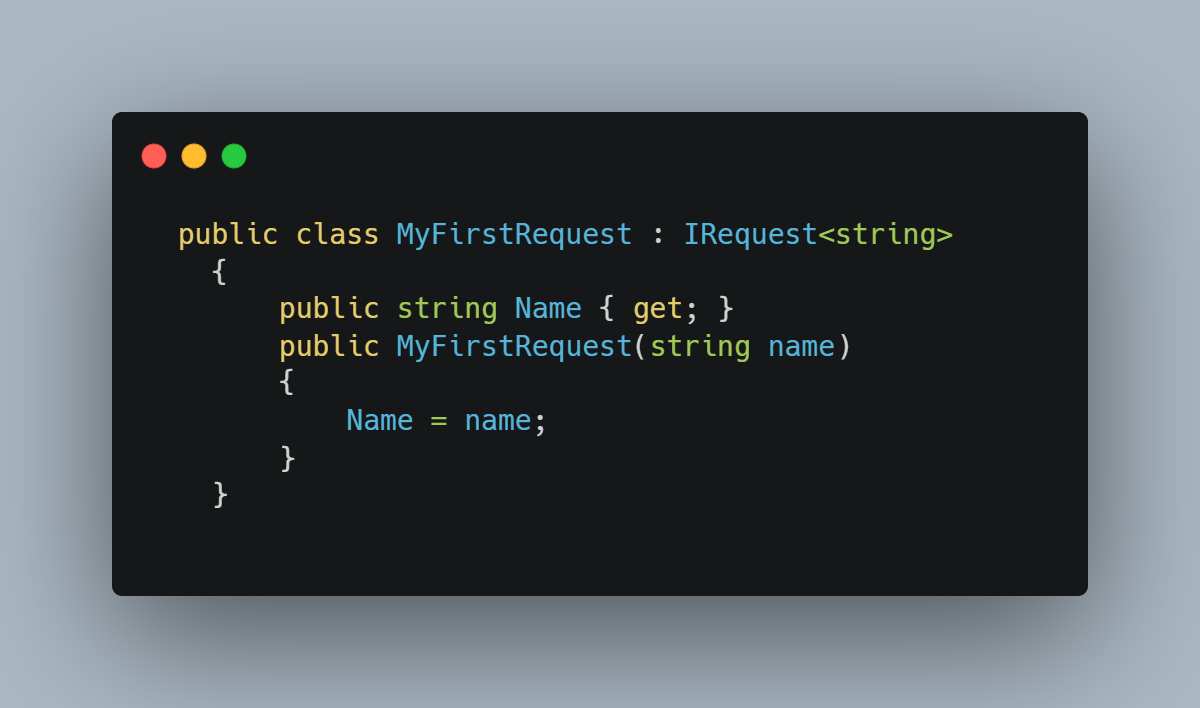 Now, just as with the notification, we need to implement a class, which will be responsible for handling the MyFirstRequest request. This time, the class has to implement the IRequestHandler interface, where we must specify in T the class of the request to handle.  Tout is the data type returned by the Handle method. The interface will force us to implement the method "public Task Handle(T notification, CancellationToken cancellationToken)". Our class will look as follows. 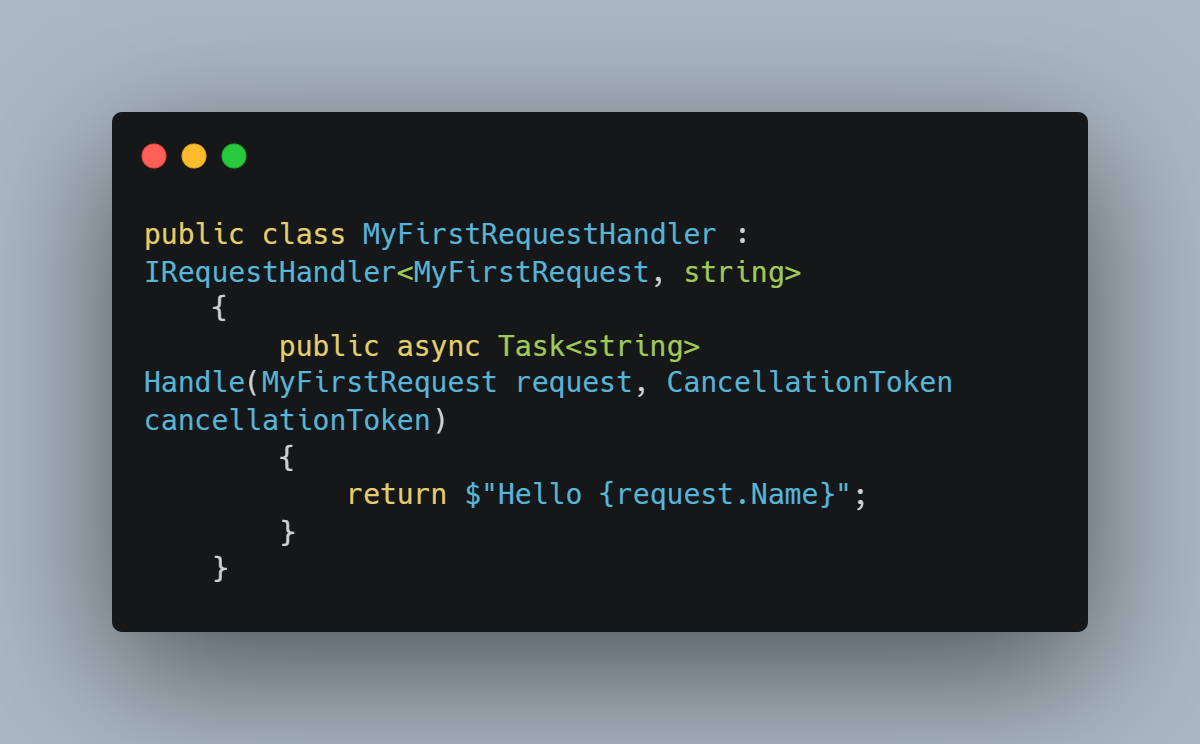 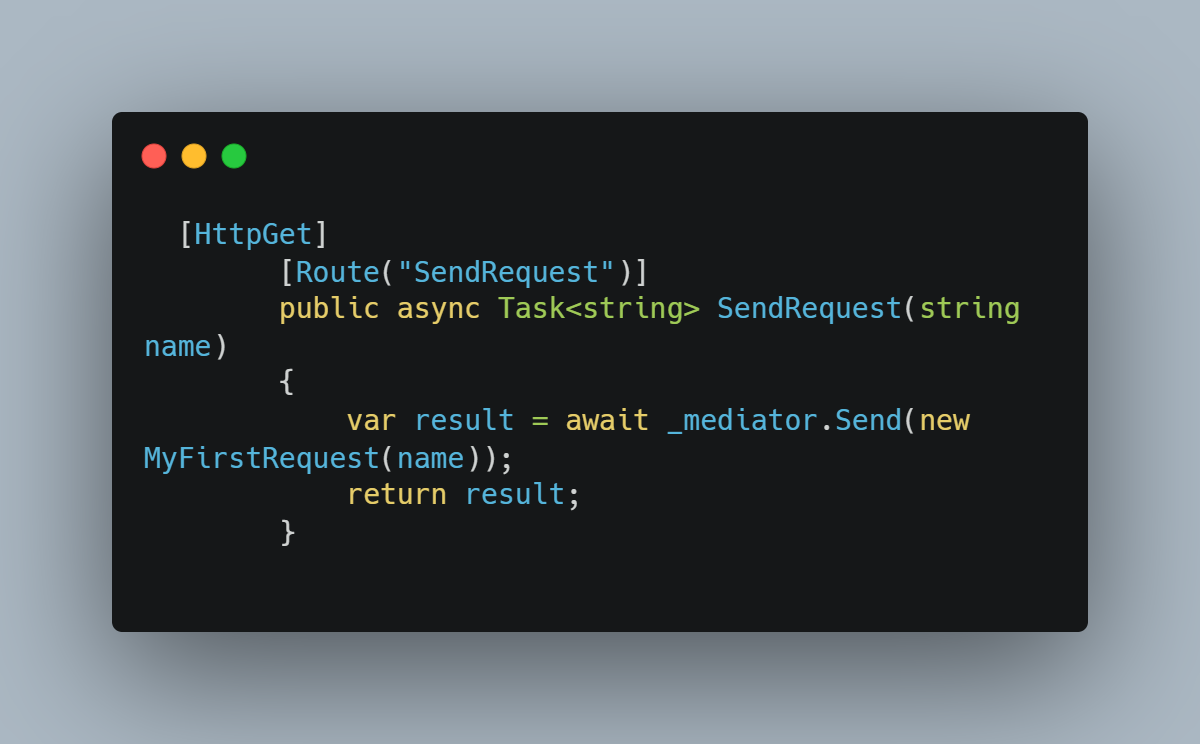 Only one handler can be registered per request type. This is a limitation of this library that we must adhere to. If more than one class is to handle a request, then we need to use…

Sometimes it is necessary to process certain types of requests through multiple classes. For example:

In this part of the article you are reading, we will create example Pipeline Behaviours for caching and logging.

Let us start with the tracing behaviour. As you can see, it's a simple class that implements the IPipelineBehavior interface. For simplicity, I'll output some text as in the previous examples: 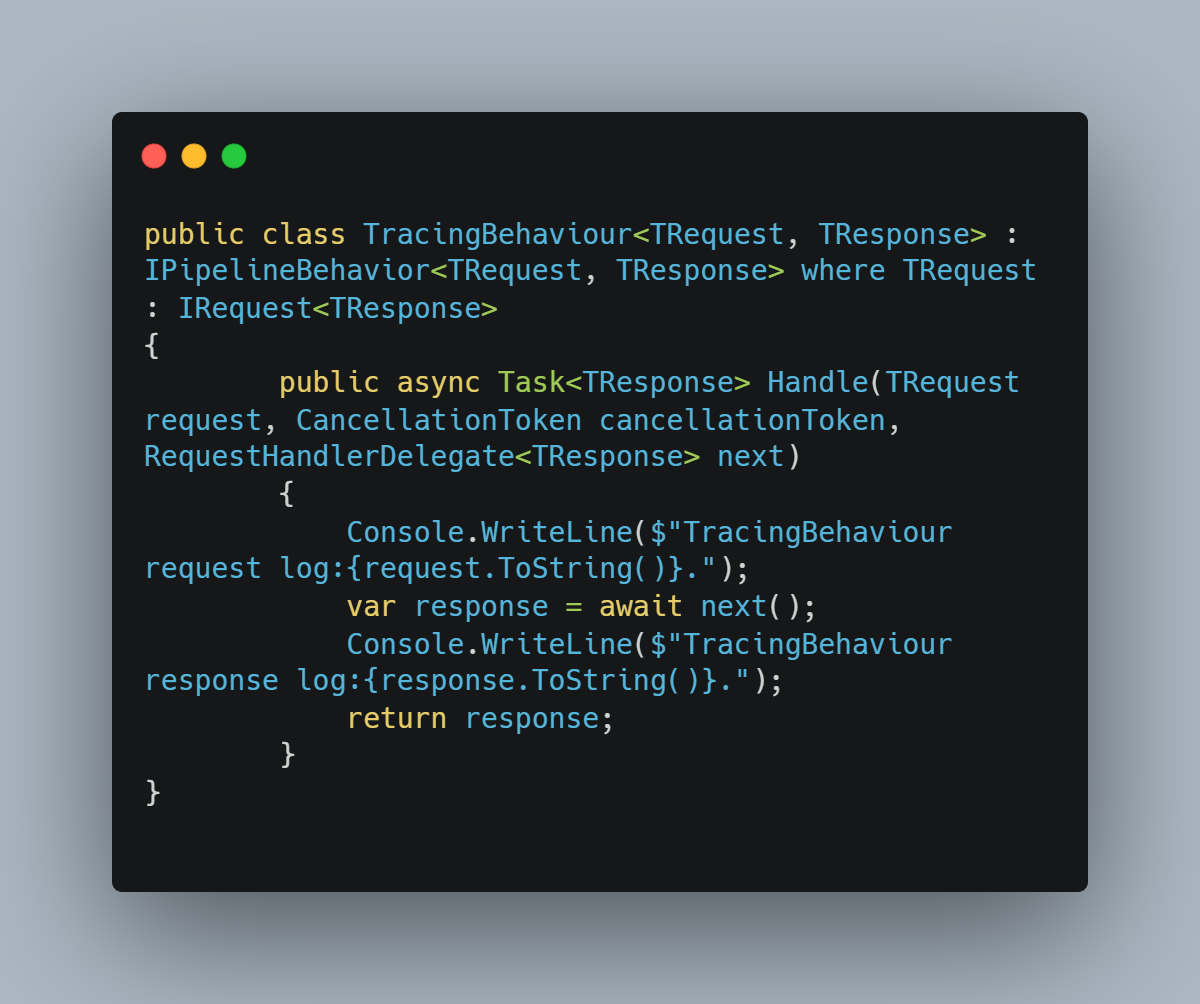 await next() calls either the next behaviour or finally, the handler for that request. Here is some code for the second behaviour: 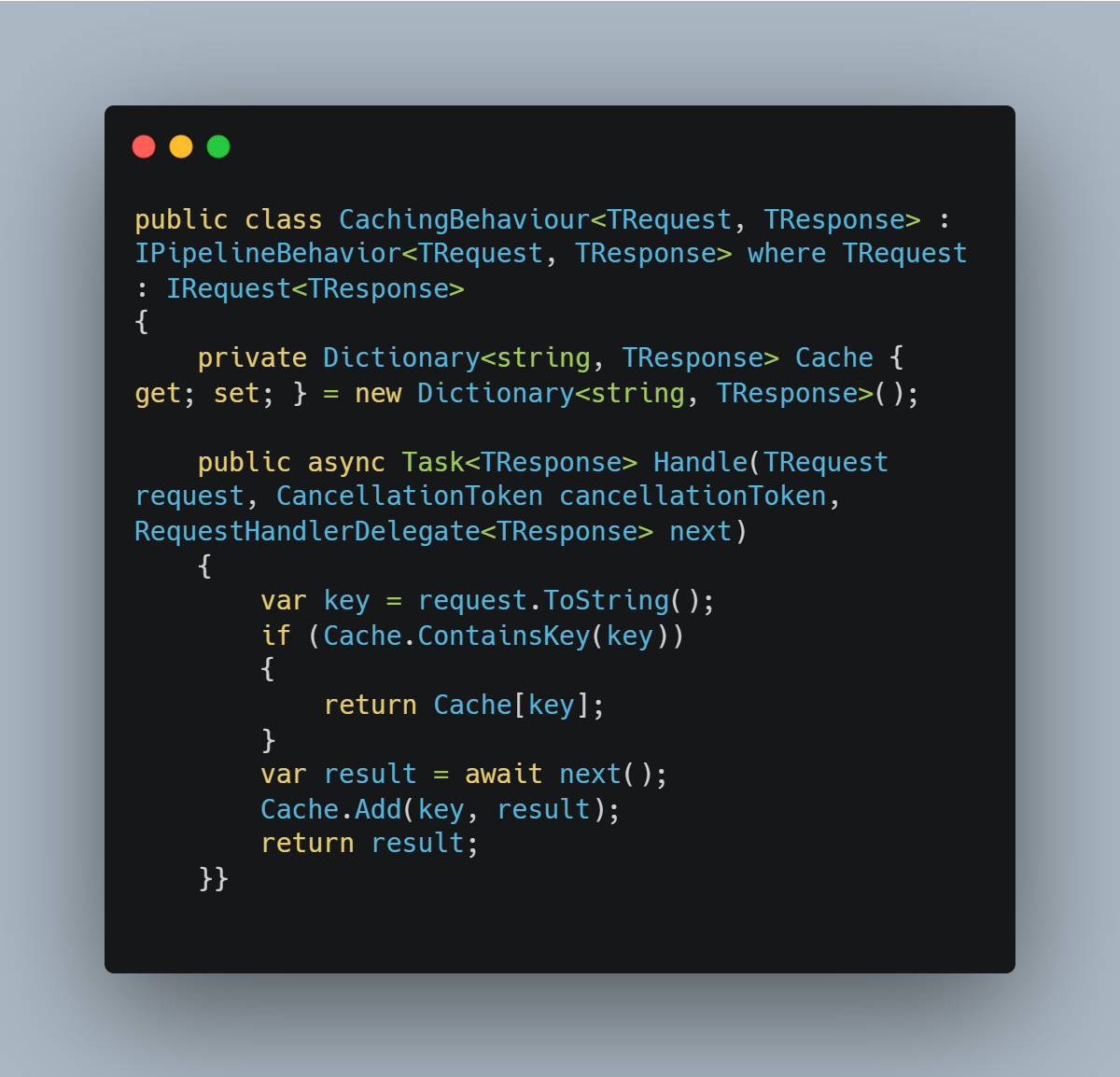 The last thing to be done is to actually register those classes in Startup.cs:

Keep in mind, that the order of pipeline registration is important. The behaviours will be executed in the LIFO style: the code of the first class, in this case:

If this reminds you of the middlewares in ASP.NET Core, it's just that, only without references to libraries that deal with web projects, so it can be used in non-web applications without all the "fat".

By using MediatR, we have reduced the coupling between controllers and the services they invoke. Instead of referencing multiple services, controllers now only reference the MediatR class. This makes it easier to maintain code and apply different configurations to your project. Note, however, that it might be more difficult for new developers who are not familiar with the concept. So make sure you refer them to this article ;)

Thanks for taking the time to read the article. I hope that some knowledge remains, and you will apply everything in practice. The code used in this article is available at https://github.com/tomaszcekalo/MyFirstMediatorWebApi